This article is written by Paige Medley, Consultant at Smarter Grid Solutions

Energy storage is a critical component to helping New York meet its Clean Energy Standard and resiliency goals. In June 2017, the New York State legislature passed a bill mandating the Public Service Commission develop a storage procurement target for 2030. While this bill currently awaits Governor Cuomo’s signature, policy is not the biggest impediment to widespread use of battery storage in New York City.

As of December 2016, NYC had 4.8 MWh of Lithium-Ion (Li-Ion) installed storage capacity within the city limits. To date, the biggest barrier to storage adoption has been the permitting process, specifically due to fire safety concerns. In February 2017, Con Ed and NYSERDA released a joint report on the “Considerations for ESS Fire Safety”. The primary conclusion was that “the explosion hazard is not the battery itself, but the gasses it may generate; therefore, the requirements for stress-relief by venting of the cells and the ventilation of the space” are the most important aspects of battery safety.

The population density and the high-density of buildings in NYC adds to both the importance and the difficulty in properly venting Li-Ion battery storage systems within City limits. Given the nature of battery deployments, most systems have different sizing, configuration, and ventilation requirements, making it difficult for the fire department to standardize storage regulations.

The report provides scalable metrics for system designers to consider, and for regulators to use as a starting point in developing energy storage safety requirements. These requirements will be necessary for large-scale energy storage adoption to take place within NYC.

Last summer Con Edison made headlines when they announced a REV Demonstration Pilot using a BSS to test a Virtual Power Plant (VPP). In April 2017, Con Ed issued a Notice of Temporary Suspension of the Clean Virtual Power Plant Project stating, “while [we] have had many productive discussions with the Department of Buildings and New York Fire Department (FDNY), we have not yet been able to come to an agreement that would allow the System to be installed in a manner consistent with its original design, nor without making changes that would impact the timing of program goals as envisioned under the original contract with SunPower.” The project was no longer realistic based on the current approval process, and plans for a residential solar plus storage demonstration project from Con Ed have been put on hold indefinitely.

Two of ConEd’s Battery Storage System projects still in the pipeline are the Commercial Battery Storage Project (4.2 MW/4.4 MWh) and their Storage on Demand Project (1.5 MW/4 MWh). The Commercial Storage Project will benefit customers who experience quick bursts of high demand during peak times, taking advantage of demand charge reductions. The Storage on Demand Project will see batteries placed in mobile trailers, and transported around the city based on daily required load reduction. Given the venting requirements for storage in the city, while the Storage on Demand project is incredibly innovative, it seems like it will face some extraordinary permitting challenges.

Delays in permitting have hindered large-scale adoption of BSS in NYC. In order for these projects to move forward, there needs to be a streamlined regulatory approval process in place and adequate fire regulations that keep the residents of New York safe and secure.

This will not only reduce the overall project costs but will indicate to the market that New York is serious about using battery storage to help meet its Clean Energy Standard mandates and drive large-scale adoption. 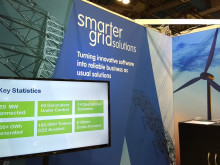 In 2017 onshore wind represented 5% of New York State’s overall electric generating capacity. Governor Cuomo has called for an additional 2.4 GW of offshore wind to be developed by 2030, as part of the Clean Energy Standard. Regulators face an important decision in how to connect this power to the grid – HVDC or traditional AC?