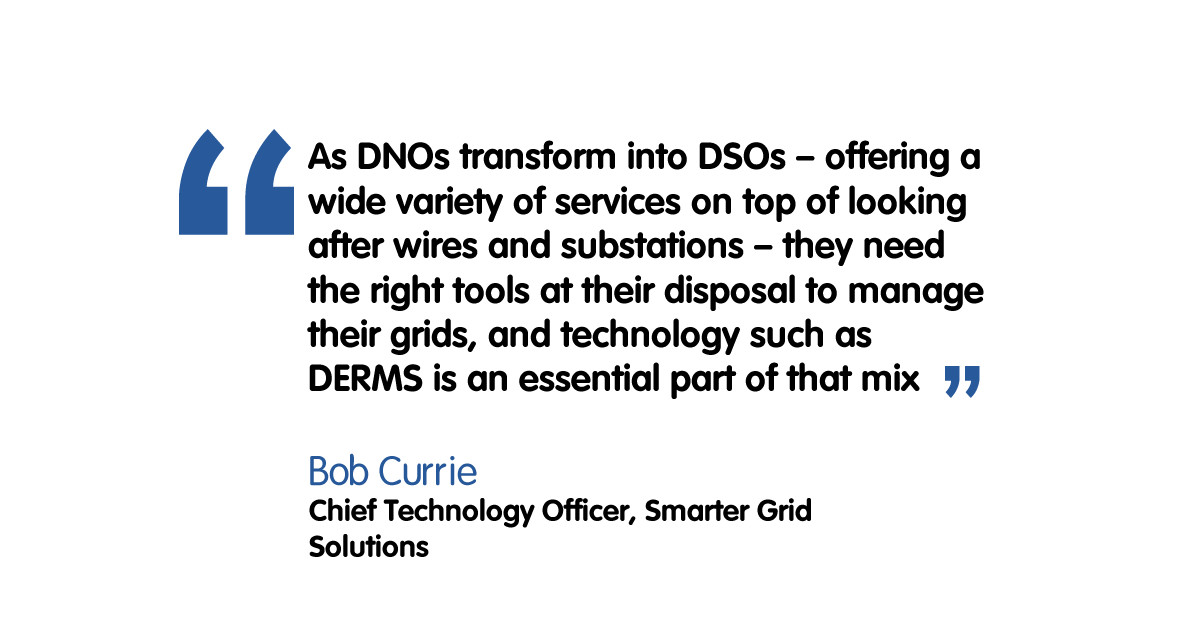 Distribution utilities need to adopt new technologies and new ways of thinking to slash the cost of integrating renewable energy generators, electric vehicles and other distributed energy resources (DER) into their grids, according to the latest white paper from Smarter Grid Solutions.

As DNOs accelerate their transition to become distribution system operators (DSOs), the report concludes that utility companies should begin implementing distributed energy resource management systems (DERMS) immediately to save money and meet decarbonisation targets, while also continuing to meet the needs of their increasingly sophisticated and active customers.

The company’s experts identify that the policies and practices used by the transmission system operators (TSOs) to manage their networks cannot simply be copied across to the distribution grid.

The transmission networks are operated using well-established and accurate mathematical models and have monitoring systems in place, along with a high degree of redundancy, multiple layers of security and a common set of price signals to operate the market.

In contrast, distribution networks have a much larger number of connections and are not commonly monitored and controlled autonomously in real-time. The amount of electricity flowing into and out of the distribution system is now changing rapidly with DER often clustering in localised areas, causing issues for individual substations.

The Glasgow-based software company is already working with four of the six distribution utilities in Great Britain and has connected more than 350MW of generation capacity to distribution grids, as well as saving its clients more than £175 million in costs.

Bob Currie, Chief Technology Officer at Smarter Grid Solutions and the author of the white paper, said: “The number of electric vehicles, solar panels, batteries and other DER being connected to the grid is going to rocket from tens of thousands at present to millions within the next decade, so now is the right time to invest in the right systems.

“They’re more complex, they have less real-time monitoring and they have different challenges in different locations due to the clustering of DER.

“As DNOs transform into DSOs – offering a wide variety of services on top of looking after wires and substations – they need the right tools at their disposal to manage their grids, and technology such as DERMS is an essential part of that mix.”

Dr Currie, a global expert in DERMS technology who is based in the company’s New York office, added: “It’s interesting to draw comparisons between Great Britain and other markets that are developing smart grids, such as Germany and the United States.

“Germany has been actively managing its grid since 2009, with renewable generators receiving curtailment compensation up to 3% a year, increasing significantly the amount of renewable generators that can connect to the existing distribution system and reducing the overall cost to customers.

Smarter Grid Solutions is a world-leading technology company formed in 2008 as a spin-out from the University of Strathclyde. Over nine years Smarter Grid Solutions has grown to a worldwide company with offices in Glasgow, London and New York and has enabled the grid connection and active management of over 250 MW of renewable generation.

The demonstration project will test technologies which will monitor, measure and regulate the...
Read More